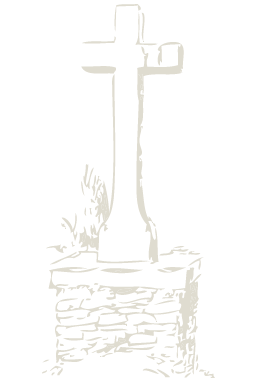 The Crosses of the Way, not to be confused with the "Stations of the Cross", are crosses that have been found since the Middle Ages. They have different functions and different origins. Of various shapes, sizes and materials (wood, granite, etc.), we find them in towns and hamlets as well as along country roads.

Essentially these Crosses marked out the paths, hence their name "Crosses of the Paths". In the Moselotte and Haute-Moselotte valley, they allowed travelers to orient themselves and find their way between Remiremont and Munster.
There are extensions on Saint-Nabord and Epinal etc.)
For some Crosses, the origin is religious or of thanks. (Ex.: Death - accident - plague - leprosy etc. They multiply from 1095, when the right of asylum was extended to the Crosses of Way.

These Crosses then have a dual role of guide and protection.
The railway cross is a very widespread Catholic religious symbol from the 16th century to the present day. These crosses are due to the public will, of the communities or the private one of the families.

We meet them along the roads, in towns, at crossroads, they guide the traveler and protect him from the unknown and bad encounters. They are sometimes a place of pilgrimage like the cross of the branches for example.

INSTRUCTIONS FOR USE OF THE CARD
- Click on the “full screen” symbol above the Screen card
- Click on the "cross" symbol of your choice.
- On the full screen you can open the description of the "Cross"

Numerous paths and paths are marked out with crosses. There are twenty-nine crosses on the territory of the town of Saulxures sur Moselotte, as you go on your "Walk" you will discover them. Some are very damaged, others are being restored and a few have been restored.

The crosses are an integral part of the of the territory history, they are, for some, the testimonies of significant events: plague, war ...
They were the subject of a census in the town of Saulxures sur Moselotte and unfortunately many are in poor condition.
The objective of the Association for the Protection and Restoration of Heritage (Protection and Restoration) is to save this Heritage as far as is reasonably achievable.

Click on the number to see on the map the photo and description of each cross along the streets and paths of the village of Saulxures sur Moselotte. Nine of the twenty-nine crosses are inside the village. The twenty remaining crosses are scattered over the territory of the municipality.